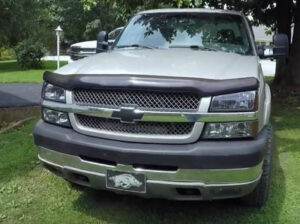 The Duramax Diesel engine is a very popular choice among many truck manufacturers. With more and more people driving diesel trucks across the world – these engines have gained a fair bit of popularity over the last couple of years. And with gas prices soaring, many of us find ourselves wondering about what we can do to increase the efficiency of our trucks.

So, is 30+ MPG[note]http://large.stanford.edu/courses/2016/ph240/kountz2/[/note] with a Duramax engine a myth? Or is it completely realistic? And if so, what can you do to increase the efficiency of your truck?

Keep reading to learn more about the things that impact your fuel efficiency and get some tips for what you can do to get 30+ MPG with your Duramax diesel engine.

What is the average factory MPG for trucks that use a Duramax engine?

Whether you’re looking at a 2018 Chevy Silverado[note]https://en.wikipedia.org/wiki/Chevrolet_Silverado[/note] 2500HD or a GMC Sierra of the same year, you’ll find that most of the modern trucks using this particular engine fall somewhere in the range of 13 and 16 MPG.

This is quite a far stretch from 30 or even 20 for that matter. Though, of course, lighter trucks like the GMC Canyon and Chevy Colorado[note]https://en.wikipedia.org/wiki/Chevrolet_Colorado[/note] are both factory-rated around 24 MPG, making the jump to 30+ a bit of a shorter stretch.

So, with most of these trucks falling short of any sort of ideal MPG – what can you do to increase it and save a bit of money on gas?

Here are a few quick things that you should consider doing if you’re serious about increasing your truck’s efficiency.

What can you do to increase your Duramax engine’s mileage?

First thing’s first – before we jump into some of the options, you should get a real-life calculation of your fuel usage. While your truck’s software is normally fairly accurate with its measurements – there are occasionally some discrepancies, and it’s generally good to have the real numbers on hand.

This is especially important if you want to get a sense of the cost versus the benefit when it comes to doing some of the modifications we’ll be talking about.

To calculate your fuel usage, do the following:

If you followed the steps above, you should have a pretty good idea of how much money you’ll be saving. However, keep in mind that if a modification costs several thousand dollars, and you’re only saving $500-1000 a year – it might not be worth it unless you’re planning on keeping the truck around for longer than a couple of years from now.

Now that you’ve got the numbers on hand, let’s take a look at some of the popular options you have when it comes to increasing the fuel efficiency of your Duramax diesel engine, and whether or not they really work as well as some people say they do.

Let’s go over each of these options in detail, and see whether or not they really hold up to the claims of being able to improve your MPG rating.

In a nutshell, when you tune your truck with efficiency in mind – you’re remapping the timing tables to achieve “peak efficiency.”

Today, most manufacturers configure the tables in a way that prefers better emission ratings rather than reduced fuel consumption, which leads to a reduced mileage in turn.

If you think about it, diesel engines are designed to output high torque at the bottom-end. And when manufacturers want to reduce the emissions, they typically shift the torque output towards slightly higher RPMs. Shifting it back down towards the bottom-end essentially allows the engine to put out more power, with a lot less effort. In turn, this would improve the gas mileage significantly.

So, how much can you increase the MPG by? Some tuners claim that they’re able to boost your efficiency by up to 7 miles on a gallon!

Does lowering your truck improve MPG?

While you probably won’t see a huge difference in efficiency from lowering your tuck, you might notice some minuscule gains if you mostly drive on the freeway.

Despite the fact that lowering your truck theoretically reduces the drag coefficient by a small amount, you have to keep in mind that there are lots of variables that go into the efficiency equation in this case.

For example, which truck you’re driving, it’s wight, engine size, road conditions, surface area, and such play a pretty significant role in determining the sort of gain you’ll see from lowering your truck.

So, while it won’t be a huge increase – yes, it’s possible to see a little increase in your engine’s efficiency by lowering your truck.

There are mixed opinions about the claim that an EGR (exhaust gas recirculation valve) delete can increase your mileage. In fact, there are even people who say it decreases it instead.

First, let’s talk about the EGR valve itself. This valve essentially helps curb excess emissions and reduces the amount of nitrogen oxide your engine produces as it runs.

The EGR delete essentially blocks off the valve, meaning that you won’t be recirculating the exhaust (and soot that comes with it) back through the engine. This approach generally provides for a slight improvement in terms of throttle response. And in turn, this can increase your fuel efficiency by 1 or 2 miles per gallon.

There are also some benefits in terms of the engine’s lifespan. As we mentioned earlier, with an ECG delete – the soot that would normally go through the EGR is no longer going back through the engine, which reduces the soot buildup in the long term.

However, there are a few potential downsides to this. First and foremost is the fact that an EGR delete is generally only legal for off-road trucks in most states (however, you’d have to check your state’s laws to find out if this applies to you as well). The other downside is the fact that on most trucks, you’ll get a CEL (check engine light[note]https://www.edmunds.com/car-maintenance/what-your-check-engine-light-is-telling-you.html[/note]) popping up after you install the mod. This means that you’ll have to get it coded out after installing it, which makes the whole mod a little more expensive.

But at the end of the day – yes, you can get a slight increase in efficiency by getting an EGR delete.

Today, there are lots of people (especially online) who theorize that according to common sense – you should get better fuel efficiency by driving with your tailgate down or getting rid of it altogether.

To really dissect this claim and figure out whether it holds up – we need to learn about something called the “separation bubble.”

This nifty physics concept basically states that as you drive, the bed of the truck fills up with a “bubble” of slow-moving air. And the air that goes over and around your truck is deflected by this bubble in the same way that a canopy would push it over the length of your truck.

However, if we remove the tailgate – this bubble can’t form, and the air going over your truck is pulled into the bed. In turn, this creates a lot more drag, which would reduce your efficiency.

So, the finite answer for this one is – no, removing the tailgate will not increase your gas mileage. But it will get you some honks and weird looks from other drivers, so keep it closed!

Do bed covers help you save gas?

While some of the claims made by companies like Tonneau present an outlandish promise of a 10% increase – it’s a pretty well-known fact that using a bed cover likely won’t help you improve your miles per gallon.

Going back to our explanation of why removing the tail-gate doesn’t improve your MPG – the bed cover would essentially kill off the separation bubble that occurs when your tailgate is up.

Just to remind you, the separation bubble is essentially a pocket of slow-moving air that pushes out against the air moving your truck as your drive. It reduces the drag coefficient by allowing the air passing around and over your truck to pass all the way around it.

However, if a bed cover is in place – the bubble can’t form, and you get an increased drag coefficient instead. In turn, this would mean a reduced fuel efficiency for your truck.

A canopy, on the other hand, essentially extends the body of your truck, and just like the separation bubble – allows the air to pass all the way over your truck with no issues. So, by comparison to getting a bed cover, a canopy can actually help you save some money on gas.

Does running the AC use more gas than keeping your windows open?

It’s undeniable, running your car’s air conditioning system will burn some amount of gas. However, the amount that it would actually use up completely depends on how efficient your AC compressor is, alongside a number of other factors such as your truck’s year, driving habits, average speed, and so on…

In terms of comparing the efficiency between the using your AC and keeping your windows open – turning off your AC wins out for city driving. That is, under speeds of 50 miles per hour, your AC is a lot less efficient, and opening your windows instead would provide somewhat better mileage.

Our Tips To Reduce Your Duramax Engine’s Fuel Consumption

While some of the methods we’ve covered above can potentially give you a slight boost in terms of the fuel efficiency of your Duramax diesel engine – you probably won’t see a huge increase off the bat.

However, there are a couple of tried and true things you can do to save more gas and, ultimately, more money.

And there you have it! If you’ve stayed with us up until this point – you’re practically an expert when it comes to the things that can improve the fuel efficiency of your Duramax engine[note]https://gmauthority.com/blog/gm/gm-engines/lml/[/note].

While there are new fuel-economy myths and opinions popping up online every single day – we recommend that you do your own research and potentially even consult with the service advisor at your truck’s dealership. And if you’re thinking about going down the mod route – make sure you run the numbers as we’ve shown you earlier on to make sense of whether or not the mod’s cost is actually worth it is given how much money you’d save by installing it, and how long it’ll take to pay itself off.

Ultimately, the biggest factors when it comes to your MPG (outside of an ECU tune) are your driving habits. Adopting a safe and conservative style of driving will help you save lots of fuel and money in the long run. Overtop of this – it will also help you avoid more accidents, which is a pretty nice benefit, isn’t it?

So, with that, we wish you luck, and hope to have provided you with some new knowledge to help you on your quest to get 30+ MPG with a Duramax diesel engine.