Every 6.7 Cummins owner wants to take proper care of the engine to ensure that it will run smoothly for a long time. Having the best oil for 6.7 Cummins in your engine is one of the first steps to prolong its life.

Over time, dirt and sludge accumulate inside, and the necessity to change the oil arises. Besides, dirty oil cannot properly lubricate the moving parts and clean the engine from harmful impurities as well as the new oil. Although it may seem like a nuisance, changing the oil can spare you from bigger headaches and hefty expenses. Neglecting timely oil changes can lead to serious engine problems and even permanent damage.

The Shell Rotella T6 is fully synthetic engine oil that provides great fuel economy when compared to conventional and cheaper oils. On average, fuel economy in vehicles that use this oil is increased by 1.5%, which leads to overall savings down the line.

In addition to lower fuel consumption, the Shell Rotella T6 protects an engine from wear and the most common contaminants, such as dirt and soot. It has increased protection compared to older, similar oils, but it is on par with products in the same market segment. 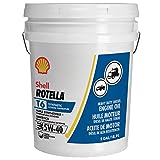 We recommend this oil is good for people who want an oil that won’t breakdown due to heat nor lose its viscosity. The Shell Rotella T6 is extremely durable and will continuously provide the same level of protection throughout the specified service interval. It will also constantly maintain the intended pressure on the engine.

As a bonus, the Shell Rotella T6 will help to prevent exhaust poisoning and keep your emissions in compliance with emission standards.

Keep in mind that this particular model comes in a 5-gallon bucket and does not include a pump. So, provided you have your pump or know another way of pouring the oil out, it’s a great value for the money.

EDGE is Castrol’s premium oil brand aimed at drivers who want to get extra performance from their vehicles. This fully synthetic oil is engineered with patented Castrol technology that changes the physical properties of the oil when under extreme pressures, such as most engines have today.

There are lots of moving parts inside an engine that are bound to touch each other, causing friction. This oil was designed with titanium technologies, which greatly reduces metal-to-metal friction. This technology also reduces the wear of the engine while improving its strength.

As with most premium oils, viscosity breakdown is not a problem with Castrol Edge. The oil should perform well at the same level from the moment you poured it in until it’s time to change it  As long as you follow the recommended maintenance schedule for your vehicle, of course.

Despite not providing an exact figure, Castrol claims that this oil also improves fuel economy. It makes sense since high-quality oils will reduce the stress on your engine to the point where little fuel is wasted. However, unless you intend on testing it yourself, there is no way of finding out whether Castrol Edge fails or succeeds here.

The package comes with six 1-quart bottles, which might not be enough if you need to fill your oil reservoir.

Due to the high demand for this Mercedes spec oil, the Mobil 1 122094 5W-40 Formula M can be tricky to find on store shelves. That alone should tell you about its quality. But just because it’s good enough for Mercedes, does not mean it is also good for your 6.7  Cummins.

Although it doesn’t shine out with an extra performance that other oils have, the Mobil 1 is great in colder climates, guaranteeing quick starts and extending your engine life.

Besides, it serves you for long, and you will probably never need to top it up, resulting in lesser hydrocarbon pollution when compared to oils in the same market segment. No oil is good for the environment but this one is a great choice if you’re environmentally conscious. It should also be mentioned that it lasts for a long time while providing exceptional performance. Under normal conditions, there won’t be any viscosity losses or heat degradation.

If you want to keep your 6.7 Cummins in original shape, then consider this oil. Its active cleaning agents keep residue buildup to a minimum and allow you to keep your engine almost as good as new.

As with the Castrol Edge, keep in mind that 6 quarts might not be enough to fill your oil reservoir and that you might need to purchase two six-packs.

Since it was designed with powerful, large displacement engines in mind, the Motul 007250 8100 X-cess engine oil is a great choice for your 6.7 Cummins. This oil is also specified for turbo diesel catalytic converters and it can increase your engine’s performance.

You might connect an increase in performance with an increase in fuel consumption, but that’s not a necessity. This Motul oil increases both your fuel economy (by 1.2%) and your engine performance. This percentage only applies when you compare this oil with conventional engine oil. If you’re looking for fuel economy, then other premium oils will provide better results, however, not all of them can provide extra performance.

Direct injection engines invariably produce soot and you need oil to keep everything clean and running smoothly. The increased viscosity of this Motul oil removes most contaminants and decreases dirt accumulation.

This particular Motul oil has been approved by many car manufacturers, such as Porsche and BMW, mainly due to its extra power output and high shear stability. Motul often partners with racing teams to try and get the most out of its oil and refine its formula. If you’re looking for top-performing oil, then you should know that Motul is constantly ahead of the game.

Since this Motul oil comes in 5-liter jugs, you might need two or three of them to fill 6.7 Cummins reservoir.

There are several different reasons why Cummins recommends this oil. For starters, they know that their engines are used in a wide range of temperatures. Besides guaranteeing safe starts in freezing temperatures, this oil is also great for hotter climates due to its thermal capabilities. Cummins also knows that this oil is excellent at protecting the engine from soot and other deposits and that it offers increased fuel efficiency over other oils.

Cummins claims that this oil lasts for 5.000 miles during normal operation, maintaining its viscosity and overall performance. It should be more or less true since this oil has reduced high temperatures carbon build-up (meaning that oil consumption is improved) and above-average soot control (meaning that the engine can perform during a longer amount of time with the same oil).

Cummins’s recommendation aside, this oil does have the makings of great oil. It beefs up the performance of your engine while lowering fuel consumption of your vehicle and keeping everything clean. Plus, it lasts for a long time without losing its quality. If you travel constantly between different climates then you should consider this oil for your 6.7 Cummins.

Since this pack comes with 3 1-gallon jugs it is just enough to fill your 6.7 Cummins. Again, it is no surprise that this is Cummins’s recommendation.

Although every oil on this list has a great price-performance ratio, not every one of them has the same price per gallon (or per liter). As with everything else, better oils tend to be more expensive. However, that doesn’t mean that you can’t get quality oil for a cheaper price and the Delo 39146 is living proof.

Sure, it might not make any noticeable difference in your fuel consumption nor in power output (it might even seem lackluster when compared to other oils on this list), but it is still a step up if you’re using generic oil or looking for something on the cheaper side.

As mentioned before, being cheap doesn’t necessarily make it bad. The Delo 39146 will retain its viscosity during the service and keep your engine relatively clean from contaminants. With this oil, your cylinders and valve train components should remain clean and with little to no wear.

Despite not being the best oil for a high range of temperatures, the Delo 39146 is great during winter, allowing for cold engine starts without any hassle. Besides, it can keep up the engine’s performance during summer and intensive engine operation.

Be advised that a single 1-gallon jug will not be enough to fill your oil reservoir so you might need to purchase a couple more.

What is the oil capacity of a 6.7 Cummins?

Every 6.7 Cummins engine built between 2007 and 2019 has the same oil capacity. This means that 2015 6.7 Cummins has a 12-quart oil capacity if you include the oil filter. Without the filter, the engine holds between 10 and 11 quarts of oil.

When should diesel engine oil be changed?

The frequency of a diesel engine oil change depends on its usage. Normal usage (driving from point A to B) might only require one oil change per year, assuming you drive under 10,000 miles per year. Heavy-duty operations that focus on power and extensive idling periods will require more frequent oil changes. Depending on whether you use your engine for extensive or moderate heavy-duty operations, oil changes might be needed every 3 to 6 months.

What oil is the best for Cummins?

The recommended oil for temperatures above 5°F (-15°C) is 15W-40. If you use your engine on a wider range of temperatures, then it is recommended that you use 5W-40 oil. As long as you stay within these parameters, the best brand comes down to personal preferences.

When it comes to choosing the right oil for your engine, things can quickly become overwhelming. At the highest price point, most oil brands tend to perform the same and there’s no wrong answer. Under normal use, most oil brands will constantly output the same performance until it is time to change the oil again.

The key characteristics when choosing the right oil for your 6.7 Cummins will depend on your use case. Do you use your vehicle in a wide range of temperatures? Do you perform intensive tasks on it or do you just use it to drive from point A to B? Are you more interested in fuel efficiency or raw performance? How much are you willing to spend? These are the questions that you need to ask yourself when choosing the best oil for your vehicle.

Some oils, like Valvoline Premium Blue Extreme, excel both in freezing and scorching hot temperatures, but they might not output the same performance as Mobil 1 Formula M. The Shell Rotella T6 has larger-than-average longevity and great fuel efficiency, but it is not as cheap as the Delo 39146.

When it comes to our list, it’s all about preference and compromise. What key aspects of your vehicle would you like to enhance? There is no correct answer to what is the best oil for 6.7 Cummins, as it always depends on various aspects. To avoid any confusion, look at it from the bright side – there’s no wrong answer. As long as you follow our advice, you will be fine with any of the motor oils reviewed in this article.